Another 5-Star Rating at Harrison House of Snow Hill!

Fill out our contact form. We’ll get right back to you.

Visit the NEW
Education Center
Learn about aging with care.

Careers and Opportunities
Get true satisfaction out of your job.

Another 5-Star Rating at Harrison House of Snow Hill!

CMS’s Five Star Quality Rating System is a tool for those in need of skilled services to easily compare nursing communities. Every community is given a “star rating” between one and five, with five being the highest rating. A five-star rating is labeled “Much Above Average,” meaning the skilled nursing community is performing much above average overall compared to other communities. The rating system takes into consideration three main areas: health inspections including annual surveys, quality measures which offer insight on how well the community is caring for resident’s physical and clinical needs, and staffing which looks at the average amount of time care is provided to residents.

Harrison House of Snow Hill has had superb health inspections over the last several years and has worked diligently to maintain a high rating in quality measures. The staffing measure at Snow Hill has received a five out of five-star rating which speaks volumes to the quality of care provided on a regular basis to residents!

Under the direction of Juliet Fountain, Administrator and Deb Benton, Director of Nursing, Harrison House of Snow Hill has continued to provide the highest level of nursing and rehabilitative care the Eastern Shore has become accustomed to over the last forty-years! 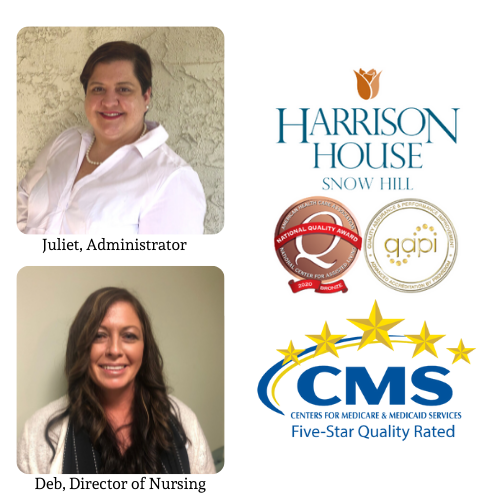